Coton is a quaint little town in Cambridgeshire, very close to my department – the Cavendish Laboratory, Cambridge. I have been to the place once before with my labmates and ventured forth on another such trip yesterday. There is a cosy little pub called ‘The Plough’ and my colleagues David, Hugo and Alex went along with me. The only difference this time? It was post-dusk by the time I left, and since the others stayed back for a bit longer, it was me all by myself crossing the narrow jungle trails on the road from Coton to Cambridge. 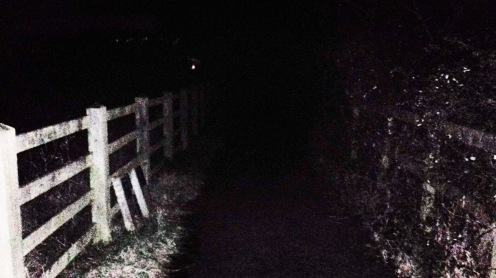 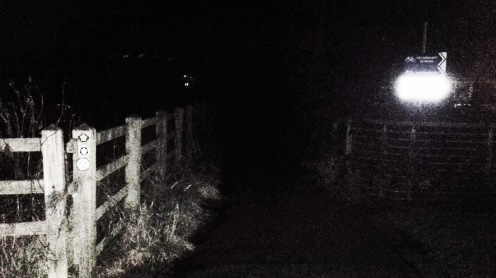 If there was ever a path that could give you the hibbie-jibbies, this had to be it. Thankfully, I had around 70% charge on my phone to use my flashlight on my 3 km walk back in pitch-dark surroundings. To make matters worse, two things happened in quick succession that made a certain fear grow in my gut in a manner that was unprecedented on that journey. Even as the trees bent onto the path, like arms reaching out in the pale glow from my torchlight, I heard a sharp rustle. Earlier in the day, we had seen a hog deer on our way to The Plough and   were familiar with their presence. However, this was different. It was a heavier rustle than a deer could make. I knew that there were no large, or atleast larger-than-deers, animal around. I stopped in my path and slowly turned. There was nothing visible at the place where the sound had come from. I stood quietly, looking, heart thumping, alert. Nothing happened. I stood there for quite a few moments.

And then I saw it!

I slowly turned and started walking.

Until I came to the bridge on the highway, slowly registering what I saw. I headed back to near the West Cafe, when I finally saw a meeting of the path with some proper light and settlement (that is where the two pictures above were taken; there was the long path I had taken beyond in the darkness visible in the pictures).

Later in the evening, I thought about the incident again and felt that if there was ever to be a spooky, possibly paranormal, story this would definitely rank up there. Even being a staunch skeptic, I allowed the wild hypothesis of paranormal entities to form in my mind and when I thought about how the path was so close to a highway and places in the jungle where people may have died (not to forget that Coton itself has atleast five hauntings reported), it did not seem all that wild anymore.

I will leave it to my readers to think about this for themselves and possibly explore that creepy causeway from Coton to Cambridge. I, for one, would not like to do that (again) anytime soon!